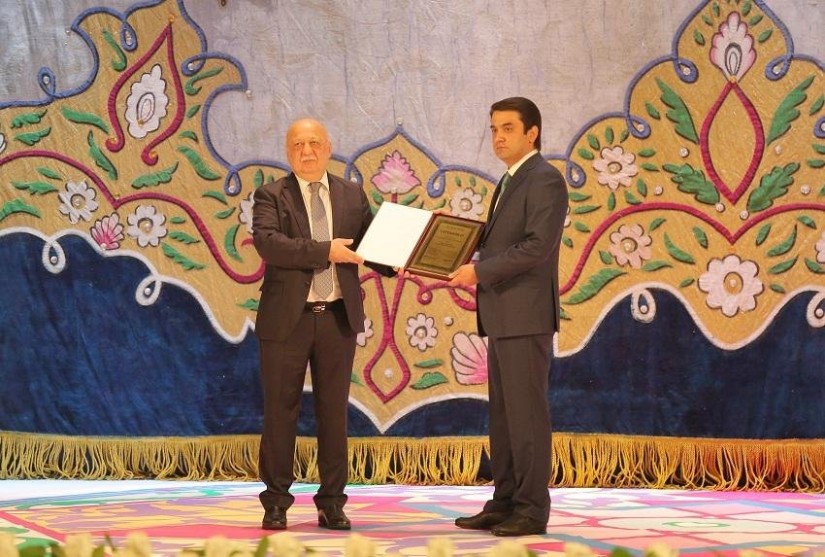 On March 21, 2021, at the Tajik State Academic Opera and Ballet Theater named after Sadriddin Ayni took place the official ceremony of declaring Dushanbe the cultural capital of the CIS in 2021.

Deputy Chairman of the Executive Committee - Executive Secretary of the CIS Beketzhan Zhumakhanov and Executive Director of the Interstate Fund for Humanitarian Cooperation of the CIS Member States Anatoly Iksanov presented the corresponding certificate to the Chairman of the Majlisi Milli Majlisi Oli of the Republic of Tajikistan, member of the Council of the CIS Interparliamentary Assembly, Mayor of Dushanbe city Rustami Emomali.

According to the Dushanbe city`s administration, the event continued with  screening of a short film about the achievements of the capital of Tajikistan and a concert with performances by masters of Arts from the Republic and other countries of the Commonwealth.

The ceremony was attended by representatives of the President of Tajikistan`s Office, CIS member states, twin cities, diplomatic corps, international and regional organizations, heads of ministries and departments of the Republic, government of Dushanbe city, employees of educational institutions, travel companies and the media.

To be informed that the Interstate Program "Cultural Capitals of the Commonwealth" has been implemented since 2011 and is recognized as one of the key humanitarian projects of the CIS, contributing to dialogue between the original cultures of the participating countries, the development of which is based on strong historical ties. The program is aimed at creating equal opportunities, build up the cultural and humanitarian potential of cities of the Commonwealth, promote the improvement of their infrastructure, enhance cultural communications, preserve the historical and cultural heritage of the Commonwealth member states, respect for culture, languages, history and traditions of different peoples, expand the conditions for familiarizing to diverse cultural wealth.

Detailed information about the place, date and time of the event is included in the program of the Forum and planned events.

Under the instructions of the Founder of Peace and National Unity - Leader of the Nation, President of the Republic of Tajikistan, Mr. Emomali Rahmon, to implement measures and to ensure sustainable economic development and on that basis, also to implement the CIS Interstate Programme «Dushanbe is the cultural capital of the CIS in 2021» on October is planned International Forum "Dushanbe-Invest"-2021.

On March 21, 2021, at the Tajik State Academic Opera and Ballet Theater named after Sadriddin Ayni took place the official ceremony of announcing Dushanbe the cultural capital of the CIS in 2021.

Deputy Chairman of the Executive Committee - Executive Secretary of the CIS Beketzhan Zhumakhanov and Executive Director of the Interstate Fund for Humanitarian Cooperation of the CIS Member States Anatoly Iksanov presented the corresponding certificate to the Chairman of the Majlisi Milli Majlisi Oli of the Republic of Tajikistan, member of the Council of the CIS Interparliamentary Assembly, Mayor of Dushanbe city Mr. Rustami Emomali.

MAIN IDEAS OF THE FORUM

In light of current events in the region and in the world, as well as the increasing uncertainty in the development of the world economy, the main ideas of the Forum are based on three main theses:

OBJECTIVES OF THE FORUM

PRE-REGISTRATION, OPENING AND HOLDING OF THE FORUM

In order to present investment opportunities of different sectors of the economy of the country and Dushanbe city on 14 October 2021 the Forum and other planned events, including exhibitions and industry sections, will be officially launched.

Forum participants and residents of Dushanbe city are expected to attend the exhibition during the day.

OPENING OF THE FORUM

Chairman of the State Committee on Investments and State Property Management will also make opening remarks. The introductory words and wishes of guests and investors will be taken into account too.

WORKING PART OF THE FORUM

After the official part, the working part of the forum will continue.

The working part of the forum will include the summary of the proceedings of the Forum and sections during the day and will address various aspects of the development of modern business, issues and problems, ways and means of enhancing the process of investment attracting, strengthening the process of import substitution, increasing exports, ensuring the development of inter-state business and investment, development of villages, tourism and handcrafts, presentations and exchanges of views will take place.

This section will feature speeches and presentations of specialized industry agencies, executive authorities of Dushanbe city, entrepreneurs and investors, representatives of foreign countries, including experts.

TYPE AND FORMAT OF THE FORUM

The International forum «Dushanbe-Invest» - 2021 will start with opening speech.

Then, in the working sector, speakers from the Ministries of the real economy on investment opportunities in the Republic of Tajikistan will provide a presentation and information especially and on specific way opportunities of Dushanbe city.

Representatives of companies, the private sector, including foreign investors and companies, will present presentations, activities and experiences in various sectors.

After the presentations, the Speakers will respond to the questions of the Forum participants.

Participants may comment on the presentations made in the working group.

In order to further clarify the questions, the parties can hold questions, discussions and negotiations within the framework of the bilateral meeting «Vis a Vis».

The Forum provides an opportunity to sign agreements, memorandums of understanding or specific agreements on cooperation between entrepreneurs and investors.

The Forum organizers are responsible for preparing these questions.
The Chairman of the State Committee on Investments and Management of State Property of the Republic of Tajikistan will present the results of the forum.

The draft outcome document will be made available to participants in advance, with an opportunity to express their views and the draft will be finalized and adopted based on proposals. This concludes the International Forum «Dushanbe-Invest» - 2021.

Within the framework of bilateral meetings «B2B» entrepreneurs and investors can meet with each other or with heads and representatives of government agencies and departments.

It is aimed at establishing business relationships between companies as well as with potential investors and suppliers in order to better understand the conditions of work in the industry.

Moderators are appointed and elected by the State Committee on Investment and State Property Management of the Republic of Tajikistan from among experts, specialists in the field or State agencies. Moderators are invited upon recommendation.

ORGANIZATIONAL WORK OF THE FORUM

The organizational work of the forum is carried out in accordance with the Plan of the International Forum «Dushanbe-Invest» - 2021, approved by the Head of the Administration of the President of the Republic of Tajikistan.

It is planned to use all possible channels of communication, including local and foreign television, radio, Internet, diplomatic missions, etc.

In the run-up to the Forum, it is planned to establish an Information Centre (The Committee on Television and Radio) which will disseminate information, data and video clips in partnership with national and foreign media.
Print and other distribution materials will be made available to the participants during the planned events.

The organizers of the forum will provide material, invite and ensure the participation of media representatives in the event.